But I really get inordinately excited when we ride by others on Big Bikes that are obviously on an extended journey like us. It’s especially exciting when we actually get to stop our motorbikes, meet and talk! 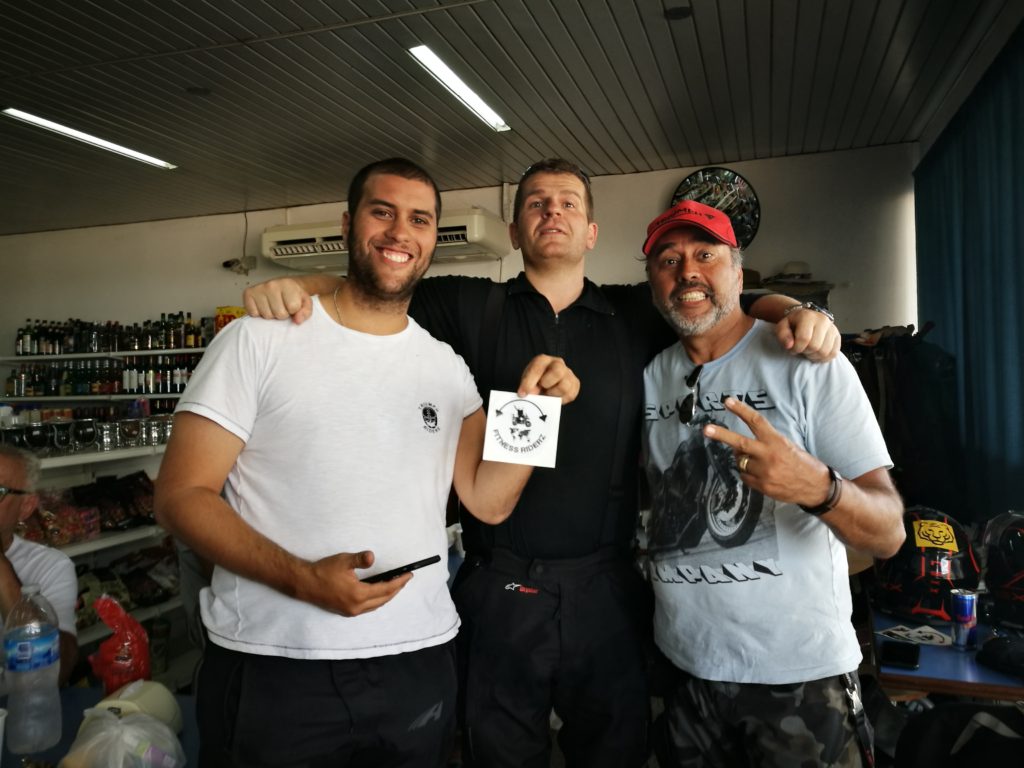 I might have mentioned it before, but Big Bikers usually acknowledge each other on the road. With a nod, a wave or a thumbs up, we show our respect and communicate that even though we’ve never met we are “brothers” on the road.

Sometimes our paths take us along the same stretch of road for a while. And when this happens, further along the road (perhaps after riding “together” for 15mins or so) we usually find a way to stop and have a little chat.

This has happened to us a few times and it’s been one of the highlights of our journey.

To be honest riding around Argentina was sometimes boring. It’s a huge country with looooooong straight roads with nothing on either side except fields of hundreds of cows or the desert. 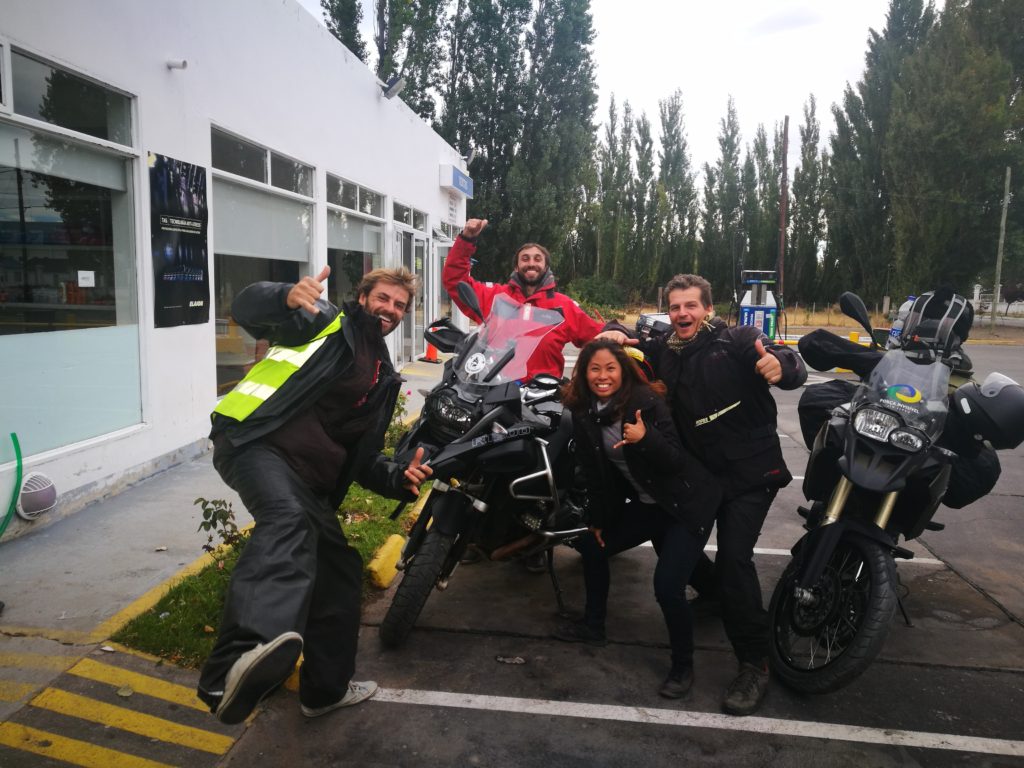 Crazy Brazilians Dudes traveling the Pan Americana on ONE motorbike!

So it was quite fun to meet Leco and guy friend (so sorry, I forgot your name) who were 2-up on an 800cc BMW. Seeing 2 guys on a small-ish motorbike without any riding or winter gear in the middle of Patagonia was fascinating.

We talked for about 2 hours in the gas station where we saw each other.

They explained that their trip was very spontaneous and that they only had 6 months to travel through both South and Central America. This was also why they had no proper gear. No motorbike boots. No winter clothes etc.

They kept warm by wearing their rain suits and insulating it with pieces of cardboard.

We wouldn’t recommend their method but they seemed quite happy and were eager to share with us what they learned on the road.

They were literally zooming through, traveling 500-600km per day so that they could visit all the places they wanted to visit in such a short amount of time.

We kept in touch and last we heard they had crossed back into South America (shipping their motorbike on a fishing boat across the Darien Gap) en-route back home.

On earlier trips they rode through North America and Africa so we’ll definitely ask them for tips when we get to those places. 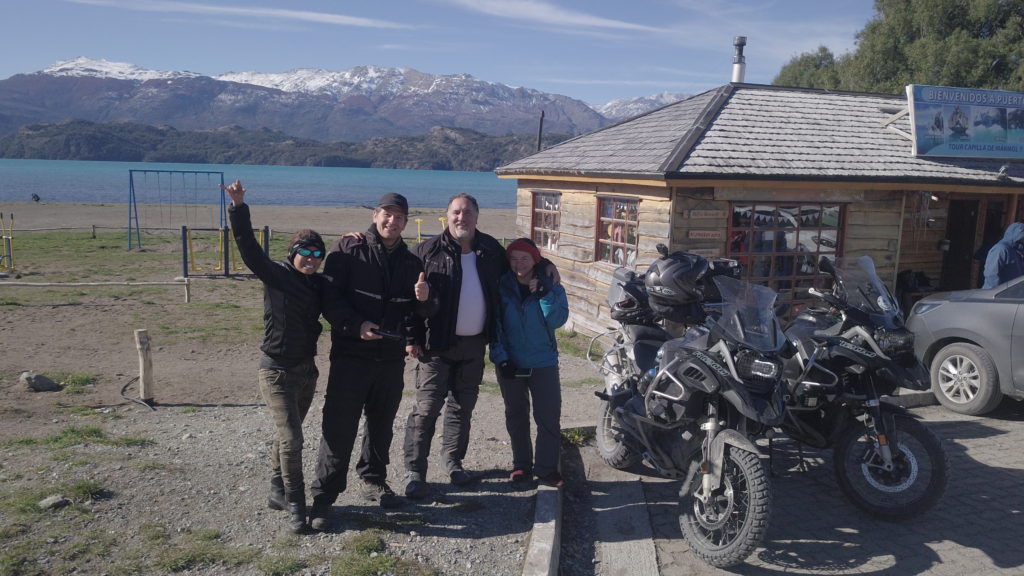 After crossing the border from Argentina to Chile we ended up in a little town called Rio Tranquilo.

It was cold and rainy but we were excited to be on the Chilean side of Patagonia.

To our surprise, when riding around looking for groceries in this tiny town, we saw a bike almost identical to ours parked by a restaurant.

This was exciting, our BMW GSA1200 Triple Black 2017 model is somewhat a rarity here. And we really wanted to meet whoever was riding the “twin” to our bike.

It might seem frivolous to those who don’t travel on Big Bikes but meeting someone riding a Bike Bike is fun, but meeting folks who ride almost the exact same bike as you is doubly so.

There is so much to talk about! Learning about how folks pack their gear on their bike or how they maneuver the non-paved roads, where they are from, how long they are traveling for etc.

We wandered around the front of that restaurant for a while, hoping to meet them, but we started feeling a bit “stalkish” so we rode off and decided to finish our grocery run.

Later on, we went back into town to look into doing the Marble Cave Tour and guess who we bumped into? Our twin bike and the couple the that was riding it!

It’s always thrilling to meet other couples 2-up on a motorbike. We feel like long lost friends almost immediately!

We chatted about everything and anything in a bit of frantic way as we had no idea how long the other couple had to stop and talk.

We learned from them that going further down south into Patagonia, during that time, was not so convenient when on a motorbike because it was really getting too cold and rainy. Being cold while riding on a motorbike is one thing but being COLD AND WET is miserable.

So we took their advice and headed north instead of continuing down south. And I believe we haven’t regretted that decision.

During our shortened trip into Patagonia we got to do the Marble Caves Tour, Stand Up Paddleboarding in Lake General Carrera and our much-anticipated Glacier Hike which is one of the reasons we wanted to visit Patagonia.

We had to wait almost a week until the weather was good enough for the glacier hike so this confirmed our decision to go north instead of trying to reach Ushuaia which is the final stop for most travelers traveling the Pan Americana.

The best part about meeting Modesto & Ale is that we managed to stay in touch and when we reached Quito, Ecuador (several months later) they invited us to stay in their beautiful home.

Spending a week with them, as part of their family, was truly memorable. 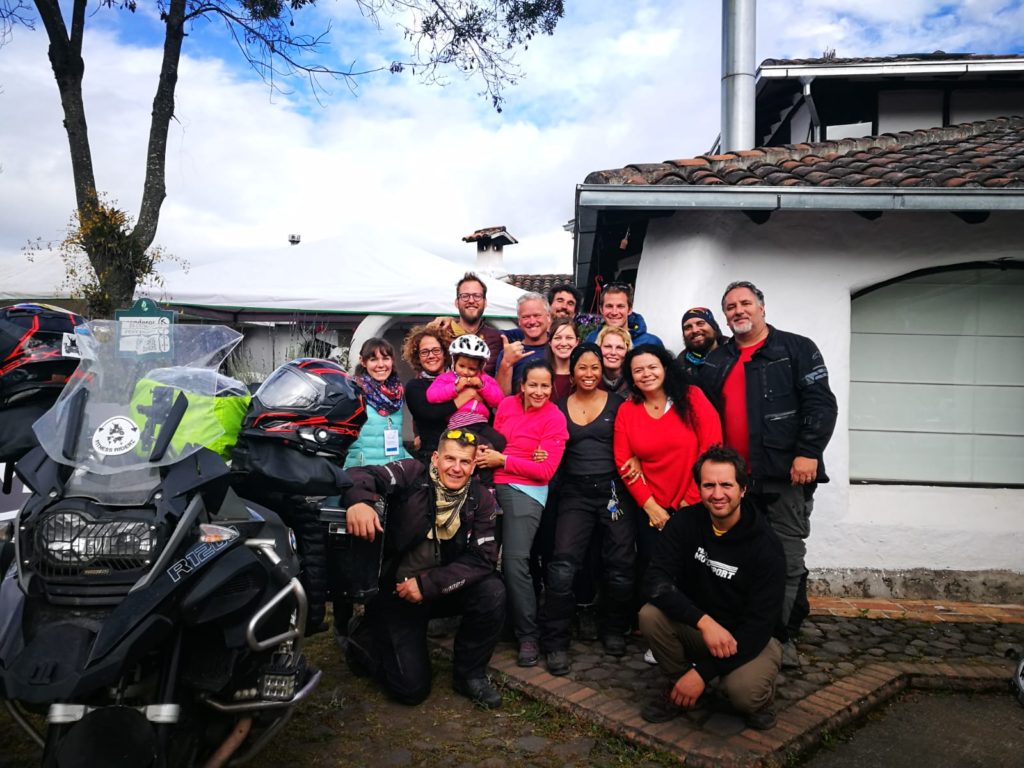 HU meeting with loads of other wonderful riders in  Ecuador 2018

We got to attend the Horizon’s Unlimited meeting with them, Stefan and Modesto had fun fixing and adding new gadgets onto our motorbike and we even hosted a dinner party together where I got to practice my slightly-rusty cooking skills (I made Pad Thai and Chicken Adobo as we couldn’t decide if we wanted Thai or Filipino cuisine) …and Ale made Stefan’s favorite Blueberry Cheesecake which was absolutely delicious!

Mo and Ale, if you are reading this, THANK YOU again from the bottom of our hearts for everything!

Riding with Juan and Carlos to Medellin, Colombia 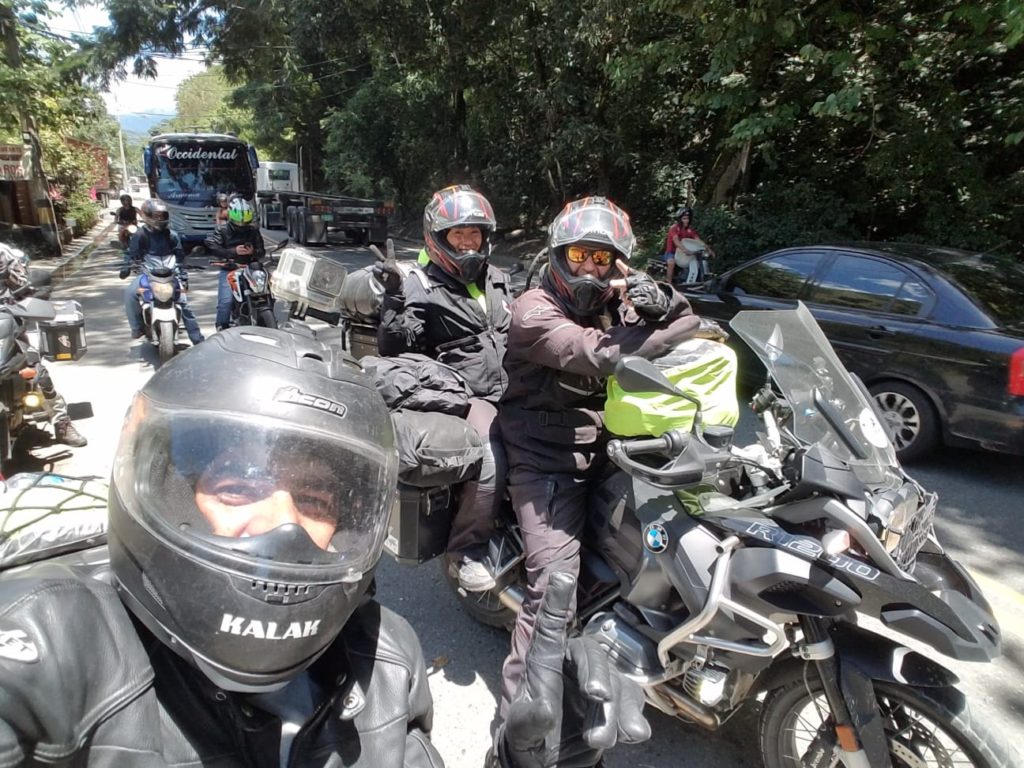 Riding behind Juan and Carlos 🙂

Riding in Colombia is CRAZY! But what makes matters worse is that there are hundreds of motorbikes weaving in and out of the traffic.

I think besides Thailand, Colombia has the most motorbikes/scooters on any given road.

What makes Colombia extra crazy is the fact that they have only 1 two-way road connecting the big cities of Cali to Medellin and most of it is getting repaired or under construction.

This meant that traveling the mere 430+ km from Cali to Medellin would take around 8-9 hours and we had to complete it in ONE DAY due to our container appointment in Cartagena.

We were dodging incoming trucks, potholes, other motorbikes and getting stopped for 15-20mins at a time due to road repairs. At one point we had to stop at a roadblock for about an hour due to an accident.

We were despairing that we would ever make it to Medellin but then we saw these 2 other bikes weaving in and out and we thought why don’t we stick with them!

This is how we met Juan and Carlos and riding with them absolutely cheered us up.

We thought we’re pretty daring riders, due to our experience with Bangkok traffic. But Juan and Carlos were a step above. They weaved in and out, overtook everyone and almost everything, and probably helped us cut about an hour off the torturous ride.

We did have a pit stop on the side of the road due to Carlos needing his motorbike chain fixed, but between all 3 motorbikes, we had the tools to get everything fixed up enough to make it to the city. 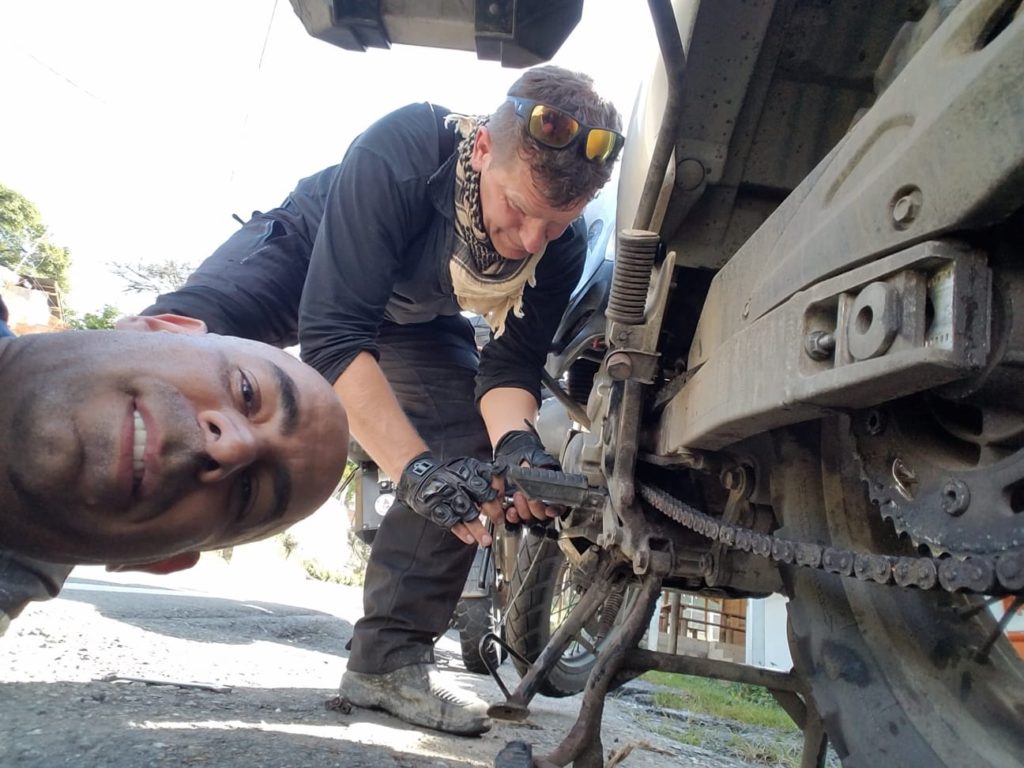 And when we found a place to stop for lunch, Juan invited us to stay overnight at his farm right outside Medellin. 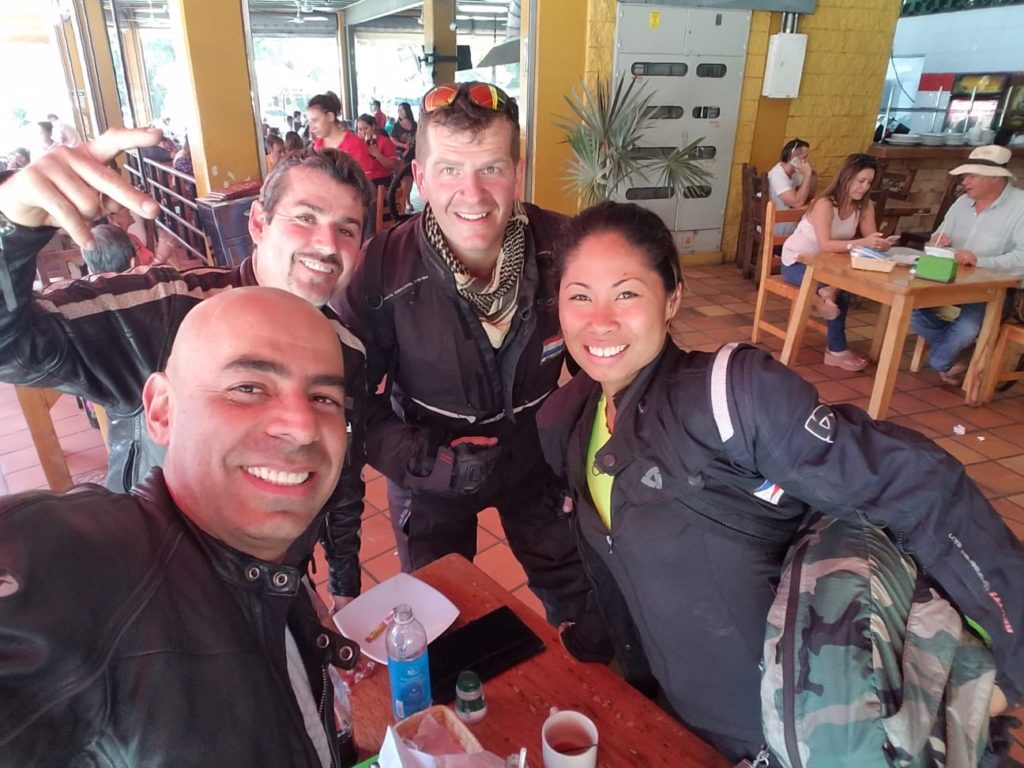 Lunch with Juan and Carlos

That was a treat. No need to look for a place to stay. No worries about secure parking etc. He even gave us his room and electric blankets to use as it was cold up in the hills.

Thanks Juan for being our Guardian Angel that day! 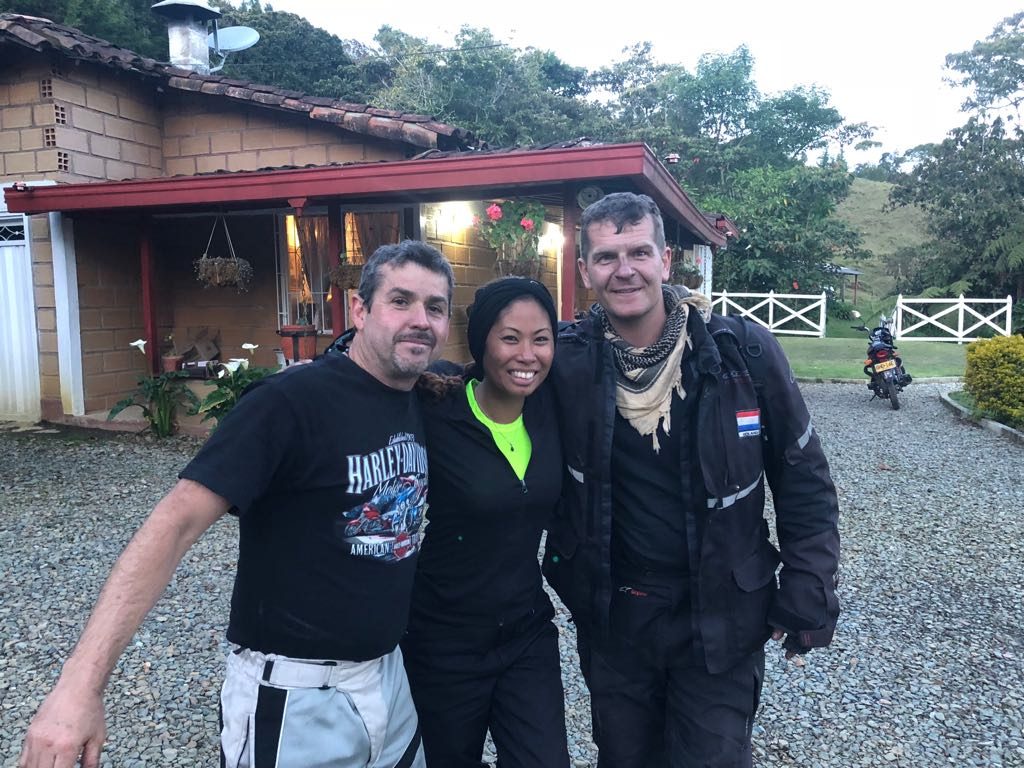 Thanks Juan for having us!