Angkor Wat & Homeless on an Island…

It’s really a different world in Cambodia, it’s like Thailand was perhaps 30+ years ago.

After our eventful 3rd Class train journey we were ever so happy to get into an aircon bus en route to Siem Reap.

We stayed at a cute hostel which kindly helped us organize a private tuk tuk service to the Angkor Wat sites.

Recently we learned that the Angkor Wat and the surrounding temple ruins are the largest religious monument in the world, with the site measuring 162.6 hectares. For more info check here: https://www.lonelyplanet.com/cambodia/travel-tips-and-articles/77381

Our private motorbike tricycle was happy to get going as soon as we finished breakfast. We were concerned that we would get hot, but actually the weather was quite pleasant and a bit chilly. During the 2nd day we actually brought some blankets and pillows from our hotel so we could have a cozy nap while traveling between the temple site

Wow! The ruins were more beautiful than we imagined and we wandered around taking a million pictures and exploring all the nooks and crannies we could climb onto without ruining anything.

Here are some of the pics we took: 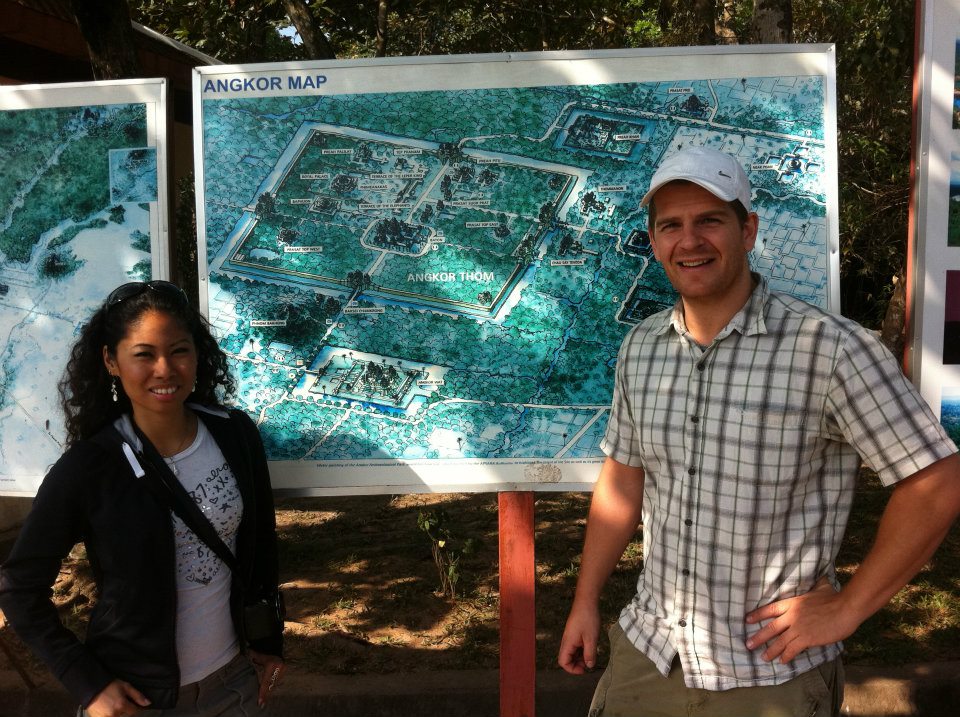 Apparently they have found more ruins, of not just temples but of massive cities showing that the Cambodian “empire” was more vast and developed than first perceived. I guess we’ll have to visit again to see the newly unearthed ruins 🙂 https://www.theguardian.com/world/2016/jun/11/lost-city-medieval-discovered-hidden-beneath-cambodian-jungle 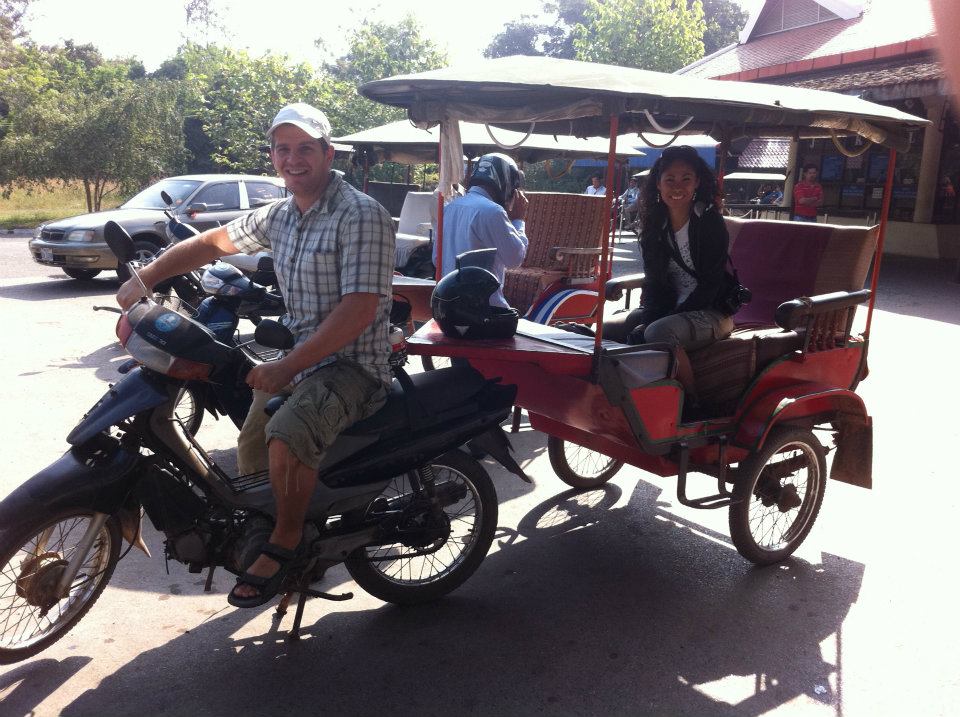 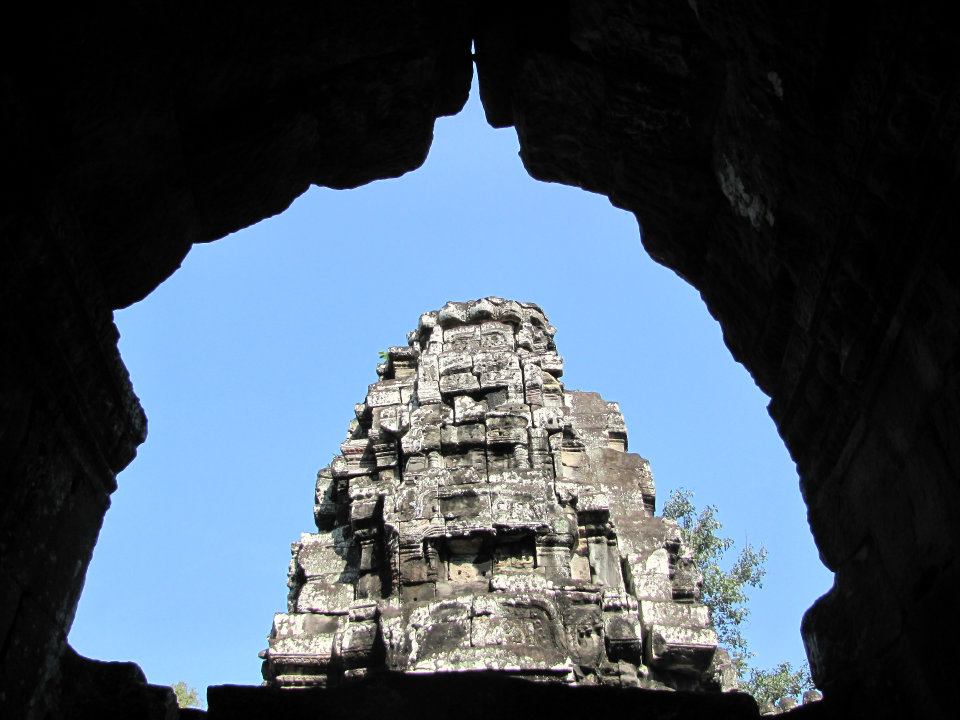 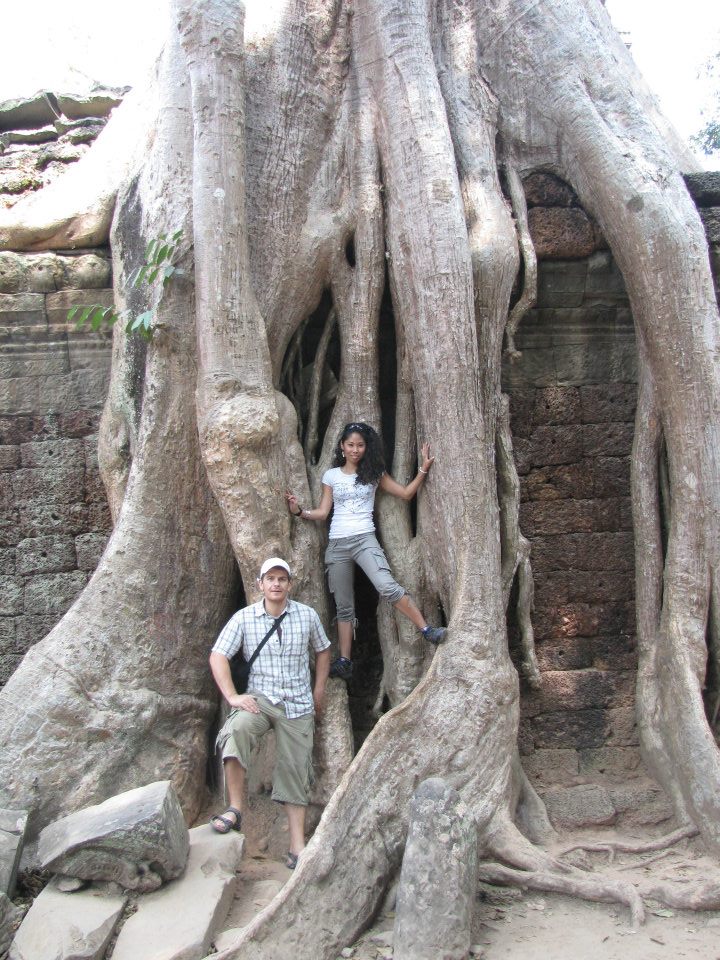 The magnificent trees slowly reclaiming the ruins to the jungle were so beautiful! 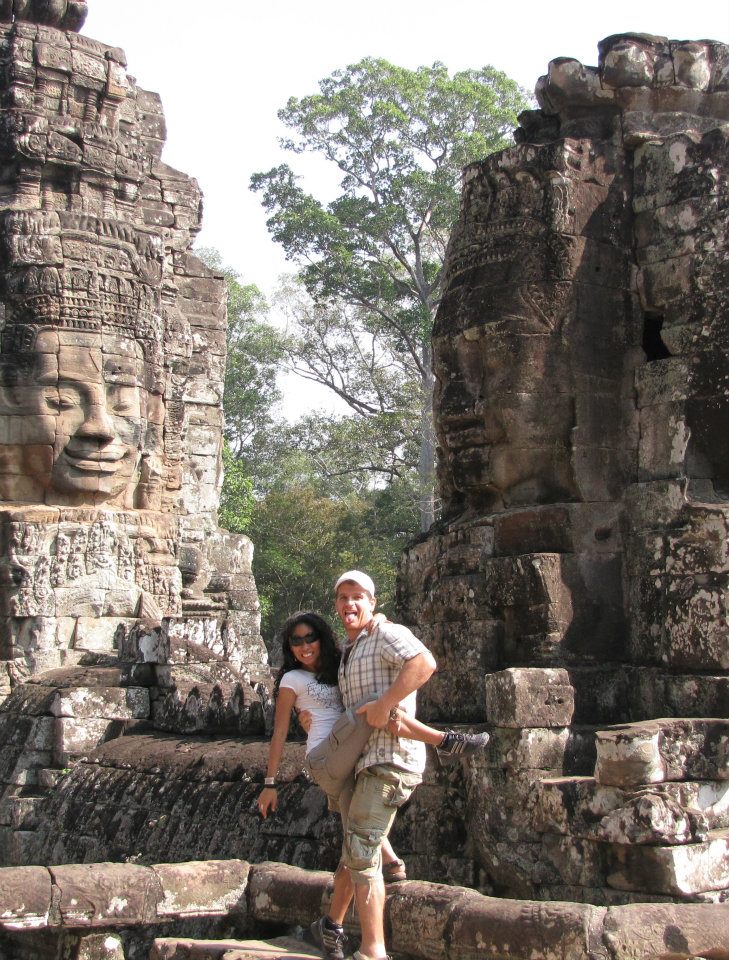 We probably could have stayed longer,  but after  3 days we felt that we had seen the main temple sites and decided to travel to Phnom Penh.  We heard that the best and fastest way to get there from Siem Reap was by speed boat–so off we went!

The speed boat was a fairly modern large catamaran and they an air-coned area with comfortable seats. But we opted to stay on the deck so we could enjoy the breeze, watch the fishing villages appear and disappear as we zoomed by. While we were on the deck we also thought to get some tanning in, but Stefan forgot to wear suncreen and was red as a lobster by the time we reached Phnon Penh.

Phnom Penh felt a bit more modern than Siem Reap. It’s a quaint city with a vibe especially along side the river. We enjoyed sitting in the cafes to people watch and we found that their is a lively outdoor night life. Small groups of folks were singing and dancing right along side the little stalls set up for the night market.

We didn’t stay in Phnom Penh city long as we heard that the beach town of Cambodia was Sihanoukville. To get there we rented a big bike (an old but decent Honda Super4)  and stashed our suitcases with our accommodating bike rental guy. 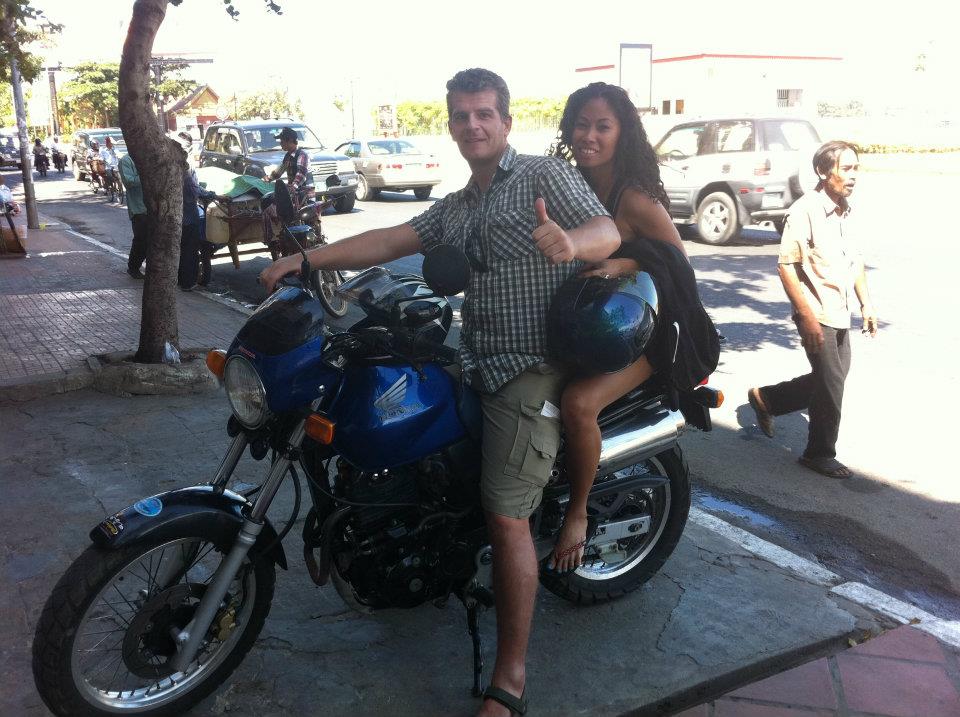 200+ kilometers later we found ourselves in Sihanoukville but while stopping for coffee we had seen an island off the coast and we were curious! We decided then and there to be spontaneous and head off to the island called Koh Rong http://www.kohrongisland.org/

The island looked pretty big on the map so we figured that the boat heading there would be pretty big too. We asked the captain of the boat  if we could bring the motorbike to the island and he started to laugh. Apparently the island was not very developed and that there were no roads, only dirt paths and buffalo trails to get supplies from the pier to the 5 “resorts” on the island.

We were a bit worried about our rented big bike, but we were determined to check out this “new” island so we paid a guy at the pier to take care of the bike (about 20 dollars per day)  and we jumped on the boat without a clue as to what we were going to find on this island.

We had never heard of this island before so we figured not many people had either. We just jumped on the boat and figured we would find some place to stay when we got there.

Boy, were we wrong!! The entire island was packed for the New Years holiday, even the maids rooms were rented out. As there were no roads and barely a bar of cell phone reception it was almost impossible to find out if the resorts across the island had any rooms for us.

We hung out in the bar for like 2 hours while the helpful bar staff tried to see if they could find a place for us. We also walked up and down the beach trying to find a place to stay for the night but nada…there was nothing to be found!

Out of desperation and frankly disbelief that we would be homeless for New Year’s Eve I (Marie) befriended some guys who had a diver’s bar/hangout.

I told them about how spontaneous we were that we ended up on an island without a single spare room and they laughed and told us if worse came to worse we could crash in their place as it was going to be closed that night as everyone was going to the main resort for the New Year’s Bash.

Well, it was getting dark and no one could find a place for us so we accepted that we would be sleeping behind their bar on New Year’s Eve. By now, I think everyone on the island had heard of the crazy homeless couple and the resort on the other side of the island found a spare mattress we could sleep on.  And it was no small feat getting the mattress to us, 2 teenage Cambodian guy had to trek about 2 hours following the buffalo trail to get it which made our make shift “behind the bar” accommodations that much more special!!  ?

We freshened up using a small bucket of fresh water right there on the pier. Got dressed for dinner and joined the New Year festivities.

It was a night/New Year’s to remember! –And it’s crazy experiences like these that made us realize that traveling and seeing new places is what we both love doing.

Some folks’ dream is to buy their own home, have kids or make lots of money.

We’ve found that ours is to TRAVEL and EXPERIENCE the thrill of seeing something new. Our world is so beautiful it’d be a shame not to see most of it before our time is up…

But our Koh Rong adventure didn’t end there!

The next day we heard that Survivor was being filmed on the other side of the island and we decided that we wanted to take a peek. We asked around and they said it was about 2-3 hours hike following the “red” buffalo trail through the jungle. 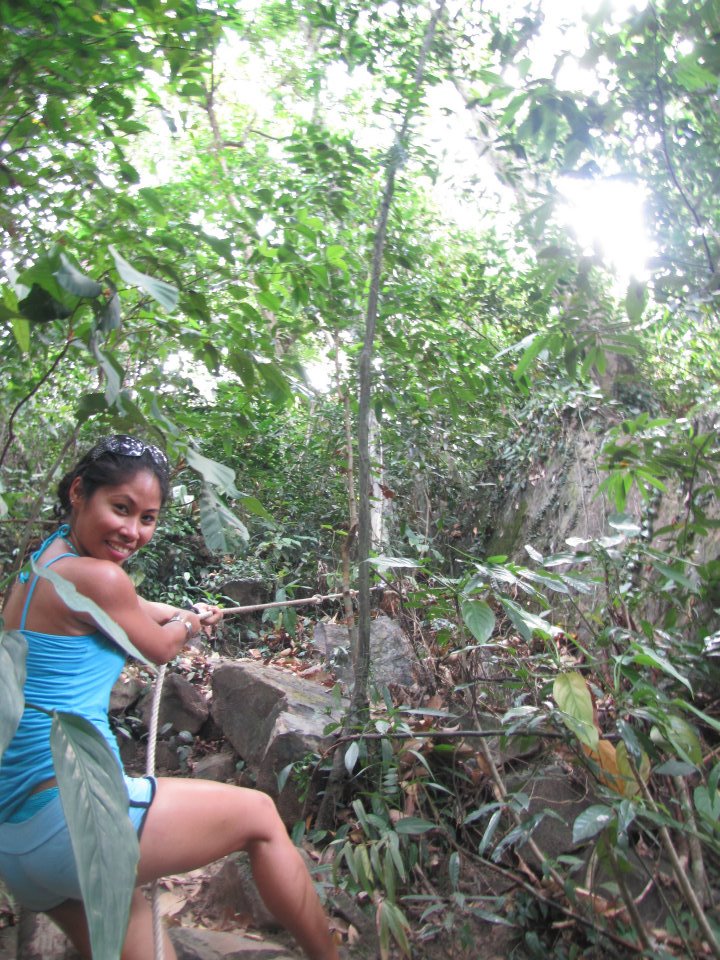 I guess the buffaloes could just climb this trail, us poor humans had to climb up using ropes… 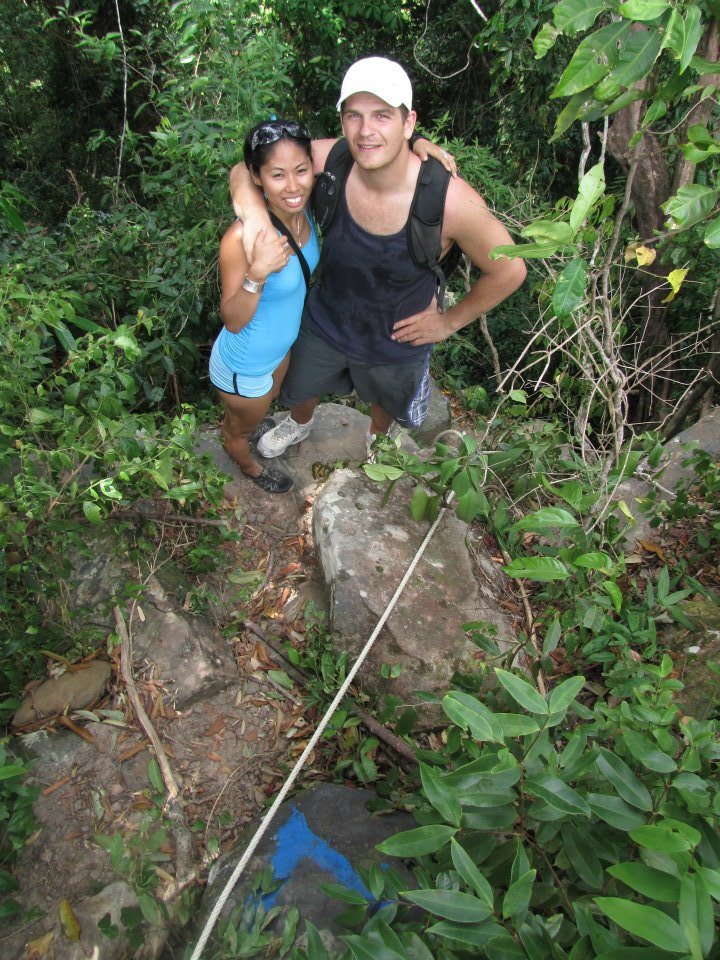 Proof that we got lost..you can see the blue paint making the rocks…we were supposed to be following the “red” trail…heheh ;P

We set off with another couple we met on the beach earlier that day. 3-4 hours later we found that we had completely lost the “red” trail and were lucky we found a tree house bar in the middle of no where. We had some much needed water and coffee and decided that it wouldn’t be a good idea to still be wandering around when it got dark, so we started to retrace our steps.

We never did get a peek at the Survivor TV team, but we did find a most gorgeous beach. The sand was pristine white and the water was clear as glass…it was amazing! 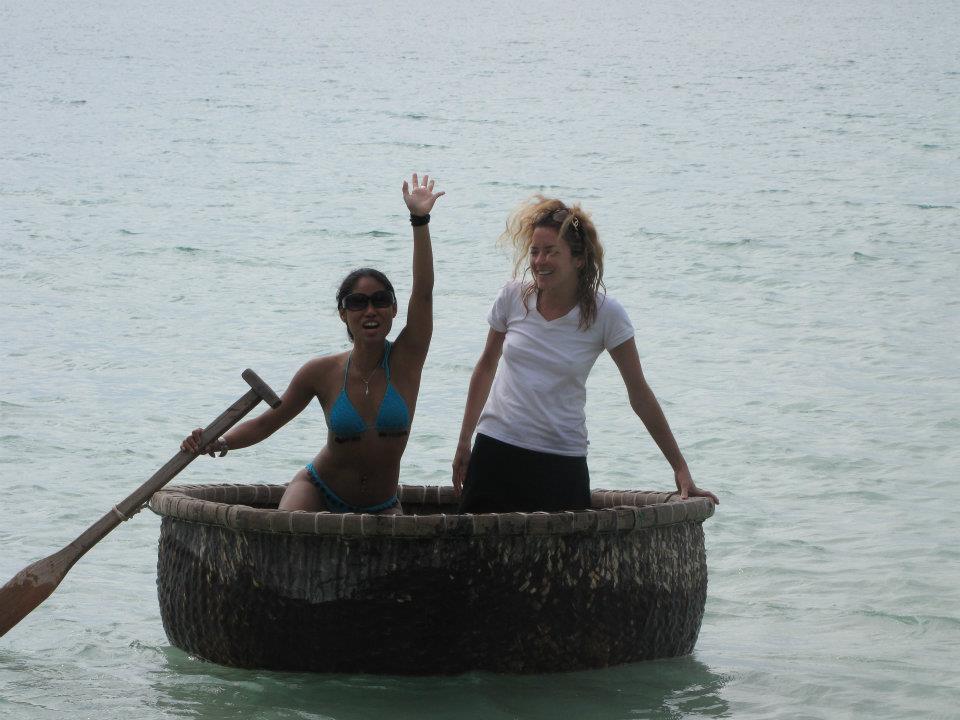 On the gorgeous beach we found…actually this little “boat” is the only way they can get supplies from the big boats to the small resort we found on this side of the island…so quaint no?

We would love to go back to this island anytime! 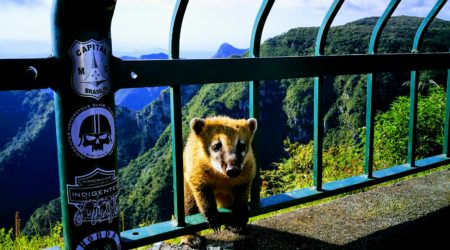 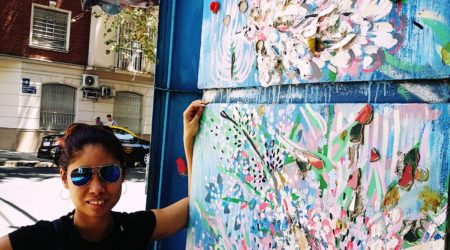 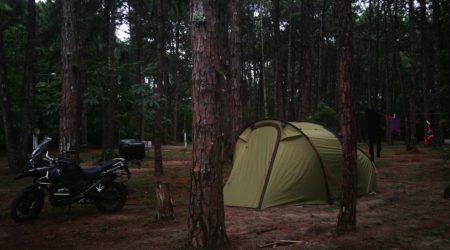 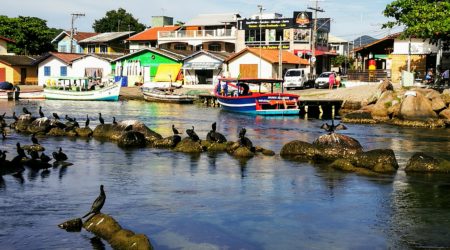 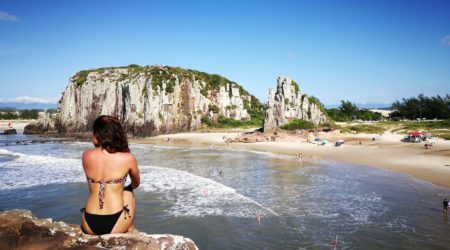 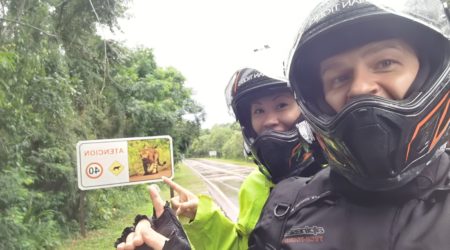 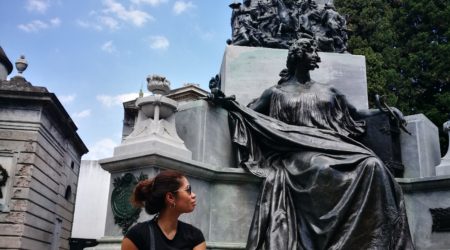 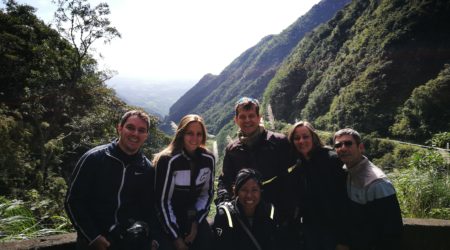 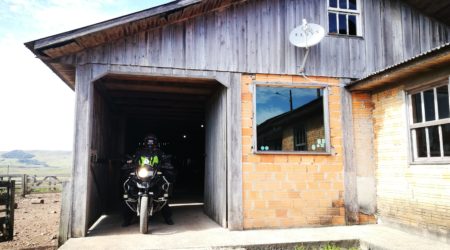 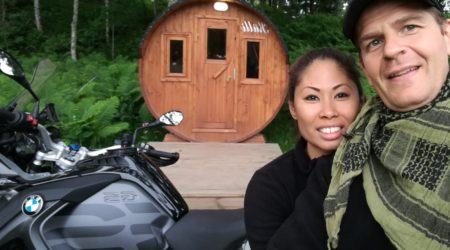 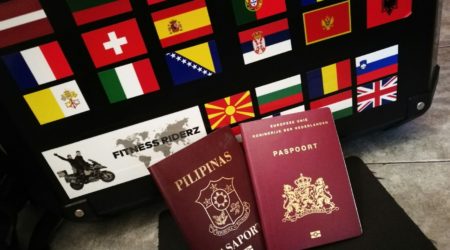