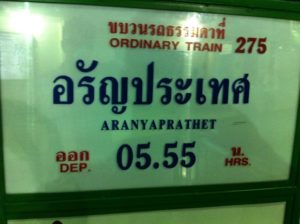 We thought let’s be adventurous and take the cheap 3rd class train tickets. The train was going to leave early in the morning so we thought we would survive the no-air conditioner trip as we would arrive at our destination just before the hottest time of the day. We always took the semi-private booths (1st or 2nd class tickets) so we figured to try the “real” local experience for a change (…OR it could have been my stingy Dutch guy instincts kicking in… :P)

THIS IS NOT WHAT WE HAD..this is what we chose NOT to have…LOL!

Ok, traveling with the 2nd class or 1st class tickets you get a cushioned seat which can be folded down into a bed at night. The night porter comes around and folds it down for you, he puts crisp white sheets on and tucks it in perfectly so it doesn’t wrinkle or come off in the middle of the night—you even get a little pillow. There’s also a little curtain you can pull out in front of your “bed” and wallah…you have a little bit of privacy!
We decided NOT to have that comfort when we chose to buy the 45thb or so 3rd class ticket Bkk to Aranyaprethet and boy were we in for a surprise! We did NOT take this picture, credit goes to http://www.alexinwanderland.com/ sadly we didn’t take any pictures while we were on the train because we were too busy trying to keep our seats 😛

We boarded the train and were lucky to find a seat. All the seats were wooden benches and there was absolutely nowhere to stash our luggage. We didn’t bring much, but we had these little roller suitcases and they wouldn’t fit in the overhead racks. We ended up wedging our stuff in between our legs and hoped the train wouldn’t get too crowded.
The train stops quite frequently, possibly at every town it crosses and more and more people climbed on. We thought they would eventually turn folks away, but no, so long as they could squeeze into the train they were good to go.
Folks with baskets of fruit, fish, chickens, farm equipment, large cans and stuff we didn’t recognize were dragged in and fit into any available floor space. Chickens, backpacks and another smaller stuff were put into the luggage racks.
We noticed we were the ONLY farangs in our booth and we were sort of figuring out why…
At first it was am using to see all the variety of locals and cargo board the train but after an hour on our wooden bench our bums started to get a bit sore. We were starting to wish we brought our luxurious travel pillows with us, not for our necks, but to use as a bum cushion.

Just when our bums were getting numb and we thought surely no one else could fit in the train, I found myself getting roughly scooted to the side of my bench by a rather confident local. She just knew that she could fit in the 3 inches of wooden bench visible beside me. This lady was by no means on the lean side, she was a Big Mama, and I was amazed she managed to squeeze herself in and just to make sure she was extra comfortable she leaned to the side, closed her eyes, put her bare, smelly feet on Marie’s lap…dirty toenails and all!

Marie didn’t want to seem snooty so she very gently slipped her lap away from the feet, but no, this lady needed her feet up and she managed to find a way to get her feet in Marie’s lap every time! She pretended to be asleep the entire time so it was kind of awkward to point out to her that she was casually using someone as a foot stool.

I guess we felt so out of our element that we decided not to make a scene and do our best to stay away from the feet without directly confronting the lady that most likely didn’t speak a word of English. *** Maaaan, I wish I took a pic of the feet in the lap, I think we were worried if we pulled out our fancy phones or camera someone would have been tempted to steal it..I mean we were traveling with folks only spending 45thb!!!

Between the chickens, the perfume of fish, the constant jostling into some stranger’s body, and the feet in the lap, we didn’t get an ounce of comfort…but we looked on the bright side!
We were WIDE AWAKE the entire 6 hour trip so we got to see every inch of the beautiful countryside. We also were very thankful we had seats, standing for 6 hours in that crowded, uncomfortable environment would have been even more trying to say the least!!!

We arrived at Aranyaprethet a bit after 1pm and while we didn’t quite regret our choice to try the 3rd class train travel experience, I daresay we WILL NOT be doing it again…

The only thing that we went like any of our expectations was that there was a strong enough breeze from the open windows to keep us for sweating uncomfortably. It wasn’t exactly a cool breeze..but it was a breeze. I’m not sure how the trip would have been if it started raining though!
We decided then and there that basic comfort and hygiene while traveling is important and something that we didn’t want to do without! 😀

Cambodia Adventure to be continued…